We had arrived in Oudenaarde, Belgium. 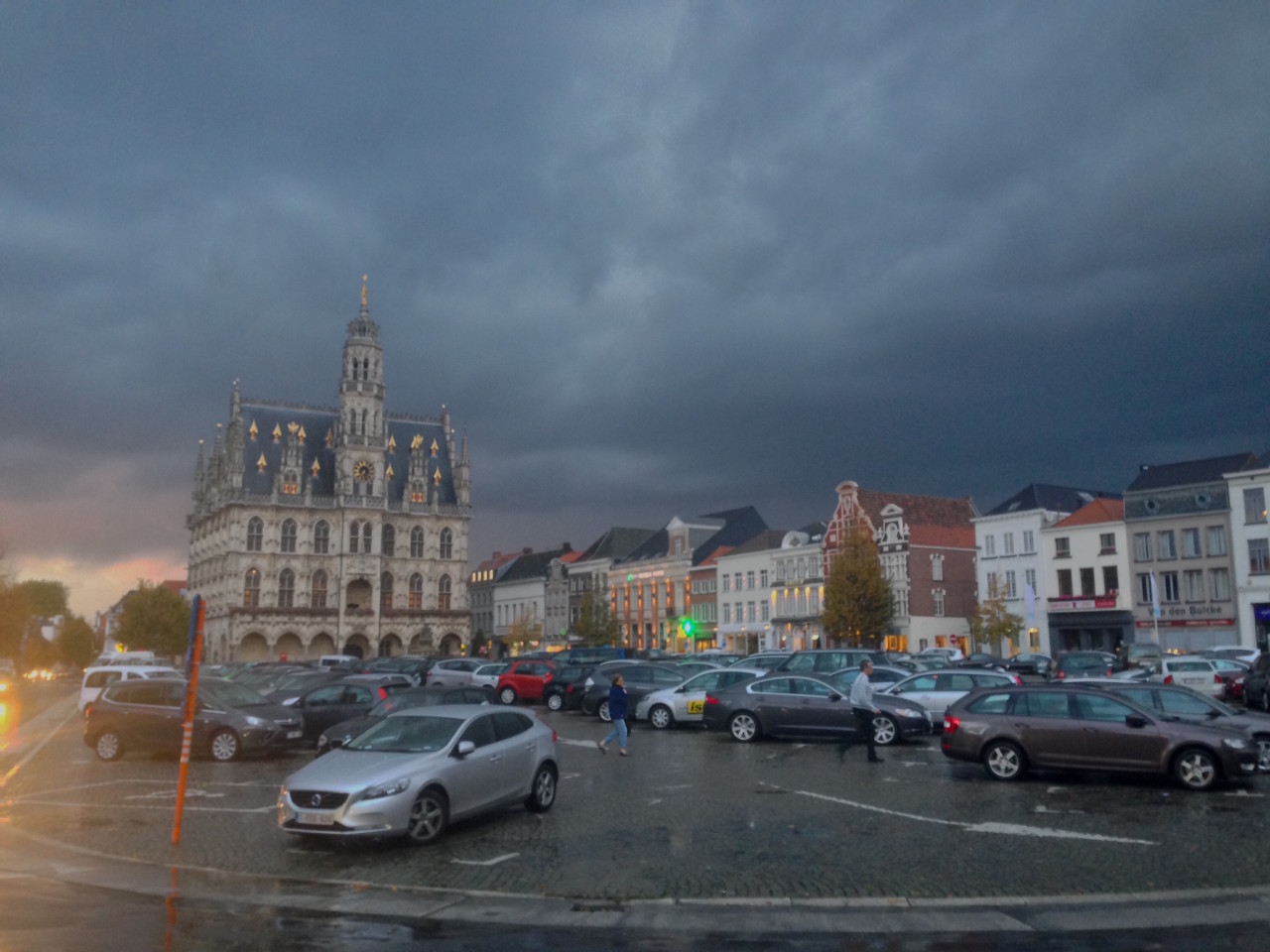 The plan was to allow a select group of journalists from the UK, Germany and Benelux, test the new Fiandre range of clothing in the place it’s named after, Fiandre, Flanders, Vlaanderen.

A name given to this clothing because the weather in this region could be famously terrible, as we were witnessing now, but as we were to find out the next day the Belgian weather could be somewhat tempestuous.

We were joined by Tinkoff Saxo’s Nicki Sørensen, who was enjoying his first few weeks of retirement and Sports Director Tristan Hoffman who had been busy planning and riding the routes we would ride.

Both ex-riders were famed for being pretty ‘hard’ so it was no surprise to find out that Tristan had been out that day riding the course in the aforementioned weather.

‘It’s not good out there, there is water hub deep and the descents are covered in leaves, mud and grit’ he warned ‘nobody wants to ride in that’ he added, shaking his head.

Yes, we wanted some bad weather to put the Fiandre range to the test, but we certainly didn’t want it this bad!

From one extreme to the next…

‘It’s perfect weather for riding!’ says Nicki, forgetting the point of the event.

As the weary journalists arrived at the Ronde Van Vlaanderen Museum, having had early starts (and in one case having not slept for 48 hours!) the coffee laid out for them must have been a welcome sight.

We started the event with an introduction to our Fiandre clothing, explaining how we worked with Tinkoff Saxo to develop foul weather protection that performs perfectly in a race environment, demonstrating the water resistance, wind proofing and breathability. 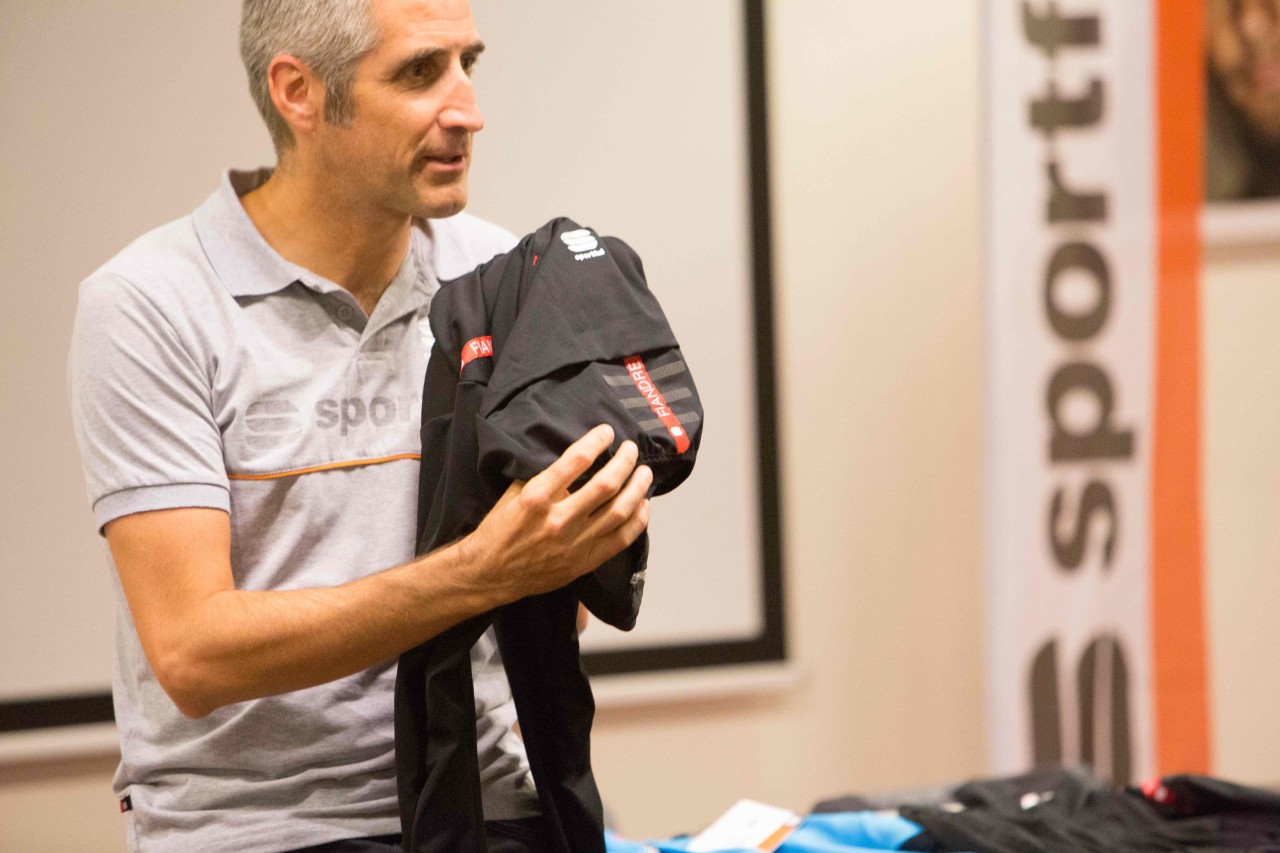 Nicki and Tristan shared their experiences of racing in the worst of weather and how the clothing had improved over the years, ‘when I first started racing, rain jackets were a plastic bag, the aerodynamics were terrible and you became so wet on the inside from sweat that it was pretty pointless, you got so cold’ said Nicki ‘the Fiandre jackets are really excellent, you get the protection but you don’t get too warm and probably the most important thing when you are racing is that it’s still pretty aero’ he added. Andrea Peron, Sportful’s Performance Director and an ex-pro with a palmarès that includes a top ten finish in the 1999 Tour de France added ‘I wish we had these when I was still racing’

The lessons done for the day it was time to refuel with some hearty local stew in the Brasserie Ronde Van Vlaanderen, where diners are surrounded by historic jerseys, photos, bidons and other cycling artifacts. After lunch the group headed to the Hotel Leopold, awaiting them were the latest Scicon rain bags (or ‘borsa freddo’ as they call them) that have been designed with Tinkoff Saxo, so new that the team didn’t even have them yet. Each bag was custom printed with the riders name and the flag of their country, adding to the ‘pro experience’. We would show you a photo but then we would have to kill you…seriously.

The bags are designed to be carried in the team cars during races and each individual compartment is labeled to show its contents making it easy to find the garment the rider need. It’s also a pretty hand bit of kit when you have a whole collection of clothing to hand out! The bags were loaded with various accessories and the 2015 BodyFit race kit too.

On top of each bag was a new Specialized Prevail helmet that is identical to the ones used by Tinkoff Saxo in most races, it’s lightweight and well ventilated with a comfortable dial in fitting system.

Of course the main attraction and the reason everyone was here was neatly boxed below with a single red ‘Fiandre’ stripe on the lid, the three new Fiandre jackets and bibshorts inside.

A quick consultation with Steve Smith, Sportful Brand Manager suggested that for the cool dry conditions with a slim possibility of rain favoured the Fiandre Light NoRain Top for the ride, paired with BodyFit and some NoRain legwarmers.

The group got changed and reconvened in the bike storage area below, where team mechanic Iván Millán had set up the team’s Specialized Roubaix bike that had been used last on the grim cobbled stages of this year’s Tour de France.

‘How cool is this? I’m on Contador’s bike!’ shouted one of the group, others were lining their bikes up to compare stem lengths ‘this one is easily a 140mm!’ 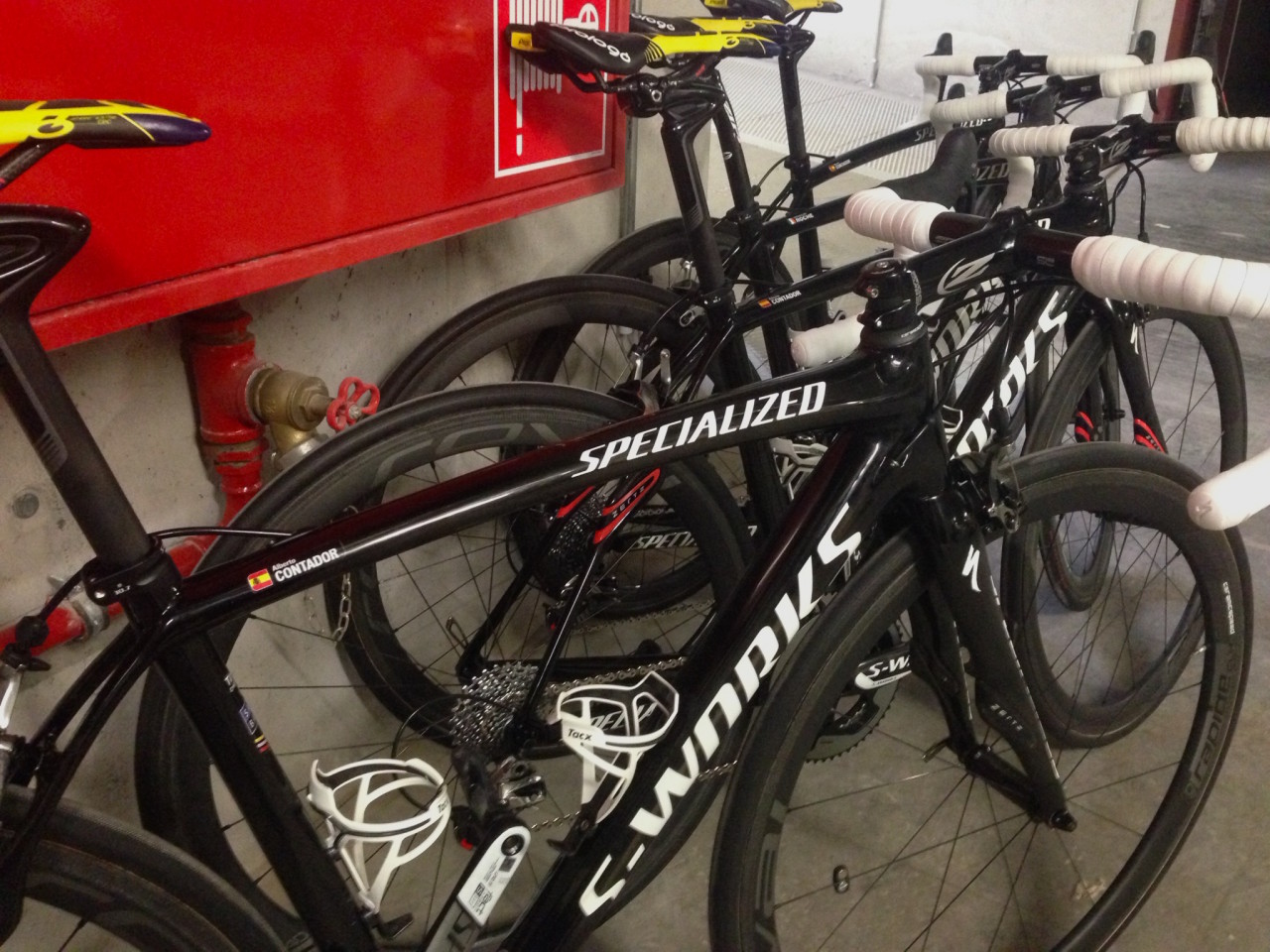 Tristan Hoffman rolled to the front of the team car and laid out a map then asked everyone to gather round, he pointed out some of the bergs and explained the plan for the afternoon, he finished his talk with this ‘the most important thing today, is safety…we are going to have a lot of fun but we need to keep safe, lets go ride!’ 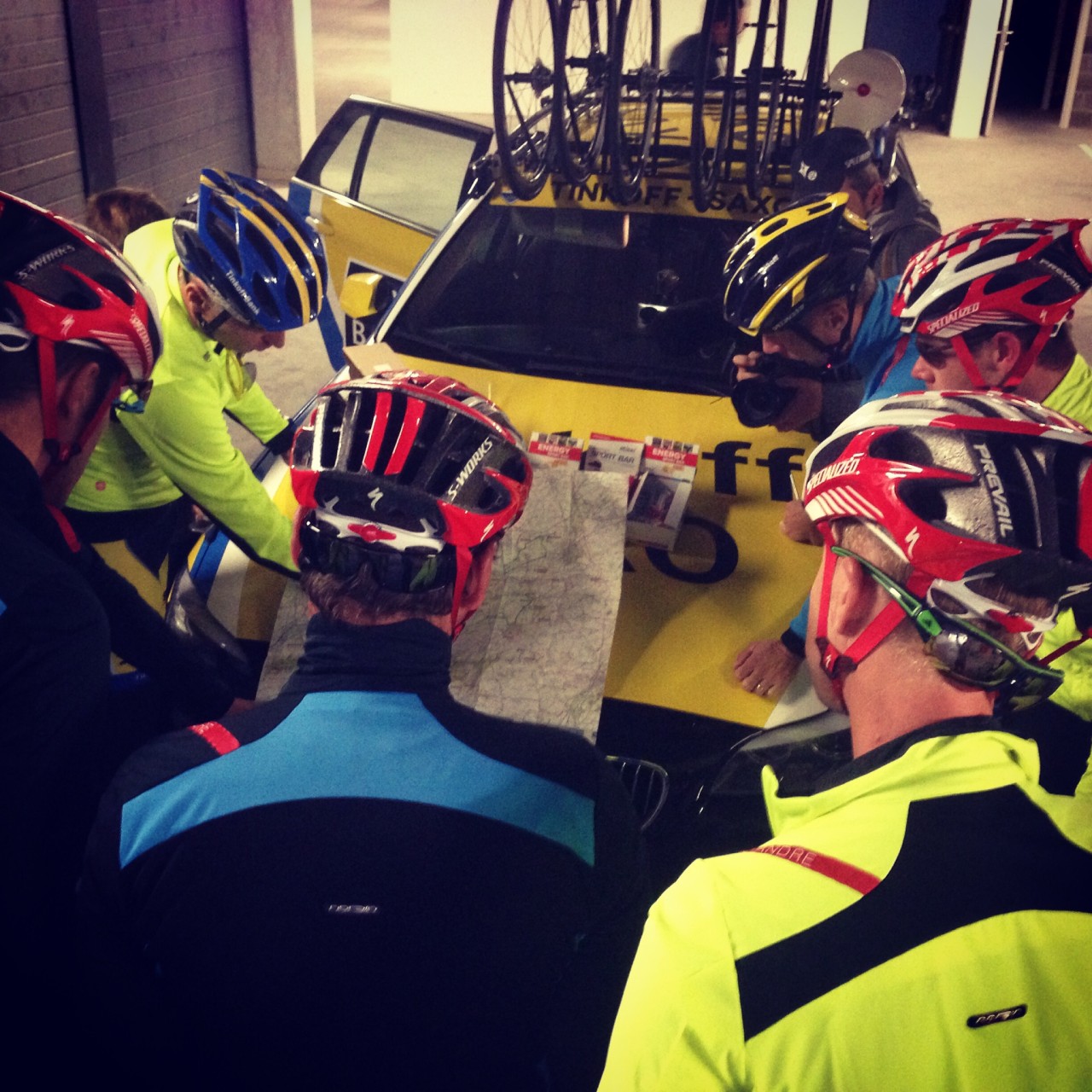 The group rolled out of Oudenaarde, with Nicki and Tristan setting the pace and the Tinkoff Saxo team car in tow, within ten minutes we were off the main roads and onto the quiet narrow lanes the region is know for. Through farmyards and villages we rode, the autumn sun casting a rich glow over the fields whilst the crisp air nipped our lungs on the heavy breaths taken to climb the bergs. Over the cobbles the classics bike were excellent, the fatter tyres and compliant frames cushioning the blows and the handling came in to its own on the technical winding descents. 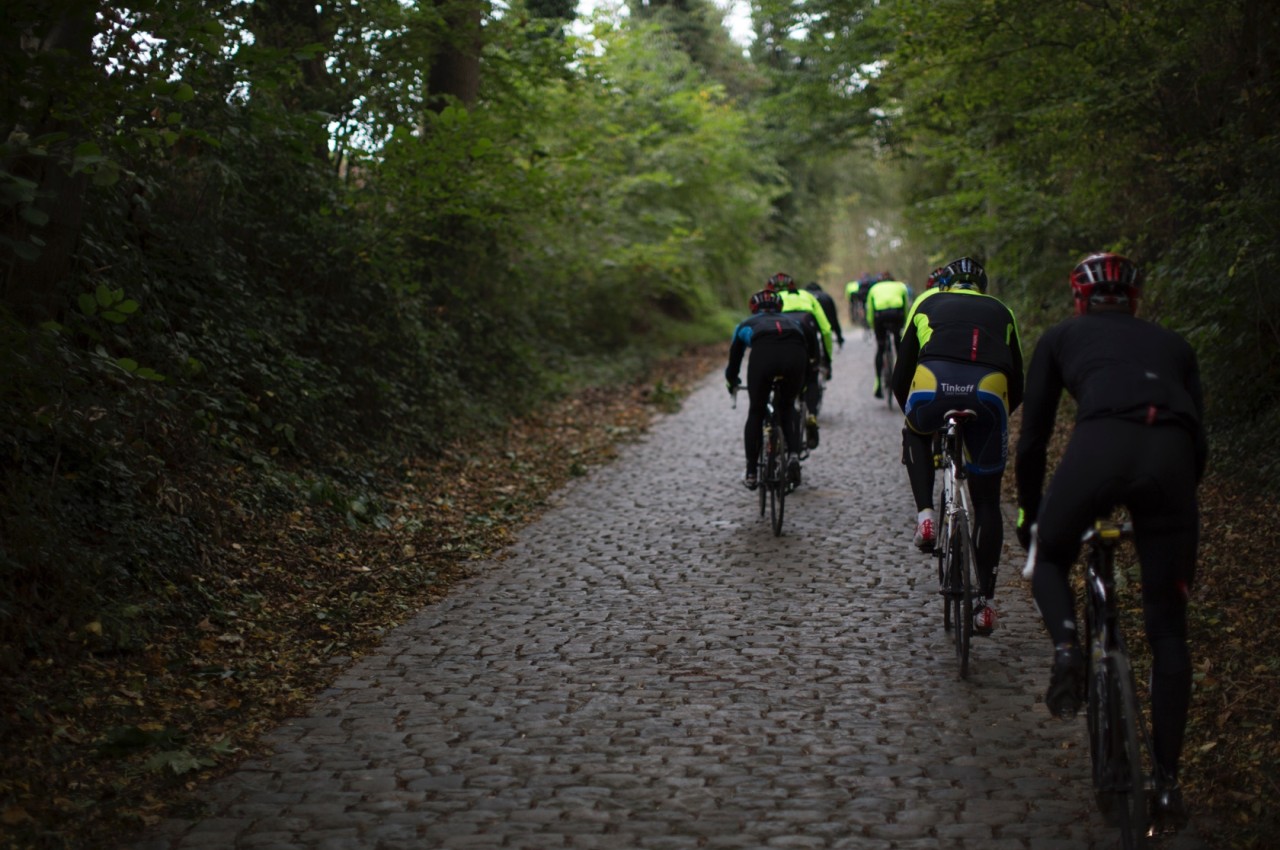 Though we didn’t have a drop of rain the Fiandre kit was the prefect choice for blocking the cold autumn air whilst the breathability meant that everyone could try their hardest to keep up with Nicki and Tristan. The odd puddle and muddy verge still highlighted the effectiveness of the NoRain fabric with every drop rolling straight off the jackets. 40km later and we were back in Oudenaarde, though we had rarely been more than 5km from it at any point thanks to the network of great lanes weaving around the town. A quick shower and then dinner with a few fine Belgian ales before an early night, the next day would be a much longer ride.

7am breakfast then straight out on the bikes.

The temperature had dropped significantly overnight so the kit of choice today was the Fiandre Light Wind Jersey with it’s Windstopper® front and thermal NoRain back worn with the NoRain bibshorts and leg warmers. Some of the group, feeling the cold, had even donned Windstopper® overshoes and gloves for the ride.

The start was a little more hectic with the rush hour traffic already building and the sun not yet risen but we were soon back on the quiet roads. The day’s mission was to tick off as many of the famous RVV bergs as possible. As the morning went on the Oude Kwaremont, Wolvenberg and Patterberg were conquered, each one becoming a battle to see who could get to the top first, the pace easing off each time we returned to the flatter ground. The final challenge was the mighty Koppenberg, a brutal little cobbled hill with an average of 11.6% tough even without 80km in your legs! The ride ended back in Oudenaarde with a piping hot bowl of soup and a tour of the RVV Museum with Flandrian legend Freddy Maertens, multiple World Champion and Vuelta winner who showed the group round the great collection of memorabilia.

Before leaving to catch his flight Nicki thanked us for the trip, though he had only ridden it once in his career, the Ronde Van Vlaanderen had been his favourite race and he had enjoyed being back on those roads. Nicki, enjoy your ‘retirement’ as a pro rider and all the best as a DS! We didn’t get the rain or snow, but the great roads, scenery, history and riding with Nicki and Tristan made for a perfect Fiandre experience anyway.

A huge thank you to Nicki Sørensen, Tristan Hoffman, Iván Millán and everyone at Tinkoff Saxo who helped make the event happen.

Thanks also to Scicon for the personalized rain bags and Specialized for the helmets.